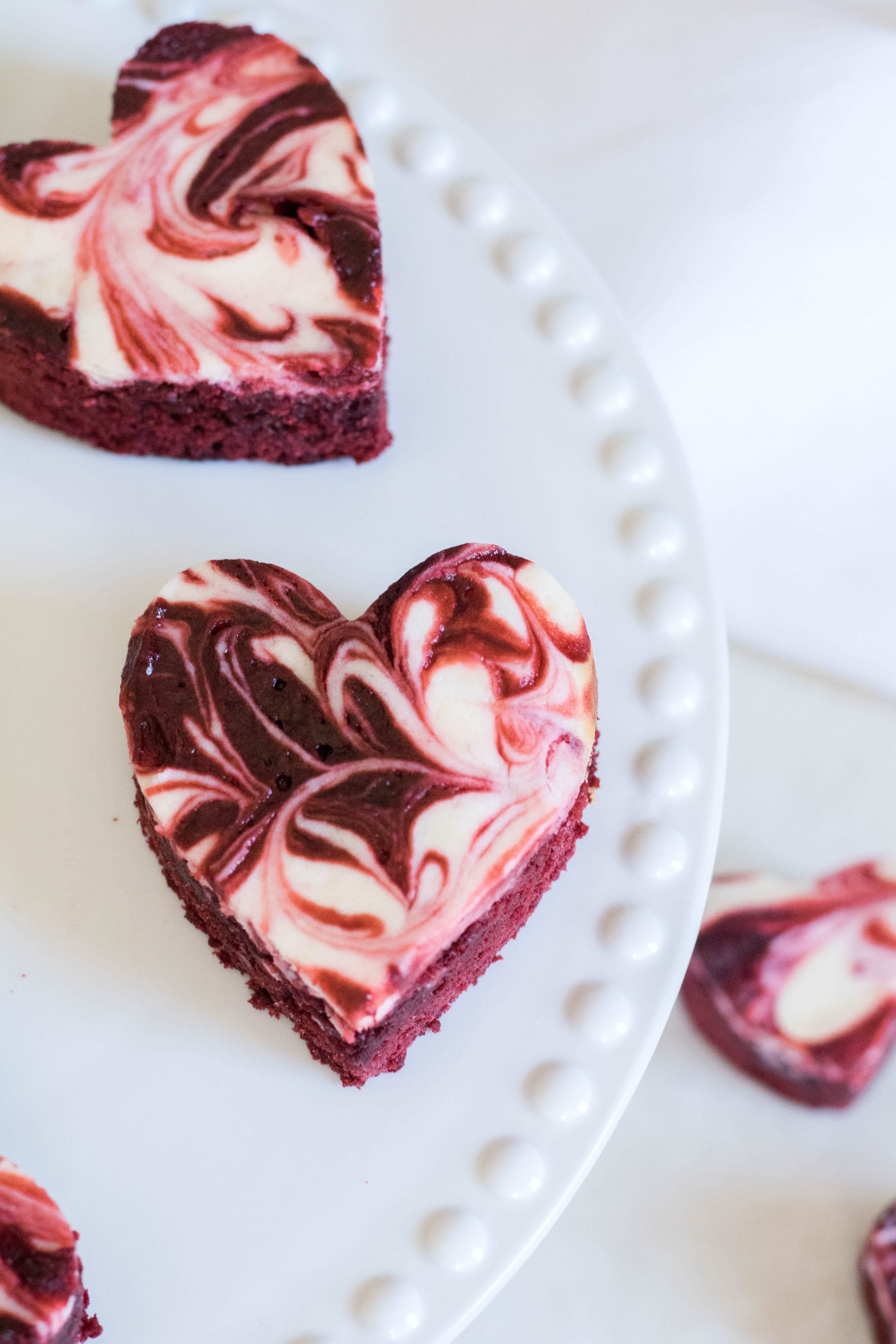 Cheesecake swirled red velvet brownies! Yes you heard it right. I have combine two of the world’s best foods into one. If you are a brownie lover this one is for you. If you are a cheesecake lover, trust me you won’t regret making this… and if you are a red velvet lover, you’ll be in heaven after the first bite!

I wanted to share this red velvet brownie recipe real quick! It wasn’t really planed but I had to share with with you guys’ because of how amazing it turned out.

So after giving it some thought, I decided to make a red velvet brownie with cheesecake swirls on top because the person I was giving them to loved red velvet in general.

So next time you want to wow someone, definitely make these red velvet brownie hearts or squares!

What is so special about these heart cheesecake swirled red velvet brownies?

They are chewy and melt in your mouth! Also they are one of the things that I make and deliver as a special order for valentine’s day… yes, they are that good, and yes you too can have them by following this simple recipe.

These red velvet brownies are a favorite across the board. They are rich and fudgy because of the chocolate brownie layer, but also have a nice and light aspect to them because of the tangy cream cheese or cheesecake layer.

What is red velvet?

Have you ever wondered what red velvet was? or maybe what is red velvet flavor?

Well… You are not alone! I’ve had the hardest time putting my hand on what red velvet cake tastes like… Chocolate? Chocolate and cream cheese frosting?… or maybe it just tased like red... whatever that is!

Here is the truth about red velvet flavor, especially nowadays, it is a flavor that combines both chocolate and vanilla flavors. The chocolate flavor is not as strong as your regular chocolate cake but it is still there. Now with the addition of the vanilla extract, you get an amazing balance of chocolatey notes and light vanilla essence.

So next time someone asks you what red velvet tastes like, drop some knowledge on them! It is a light flavor that combines both vanilla and chocolate notes. Add to that the incredible and iconic cream cheese frosting to balance the cake flavors with an incredible tang and you’re all set!

Ingredients for the red velvet brownies

What red food coloring should I use?

Why do I need white vinegar for my red velvet brownies?

When I was trying to transform my cocoa powder brownie recipe into a delicious red velvet brownie, I did some research. To my surprise most of the red velvet recipes online used white vinegar, obviously I had no clue why… But after some deep digging I figured it out.

When you mix red food coloring with cocoa powder, it looses some of it’s vibrancy. But after adding the white vinegar and baking the brownies you will notice the red pop out a little more again!

Ingredients for the cheesecake swirl

How to make these marbled red velvet cream cheese brownies?

In a large bowl combine the melted butter and the granulated sugar, and whisk for 2-3 minutes.

After whisking the butter and sugar for a couple of minutes it will look like this.

Add in the 2 eggs and the vanilla extract and whisk again until combined.

Lastly add the white vinegar and the red food coloring and mix to combine.

This wet mixture will be red and vibrant.

Sift the flour, cocoa powder, and salt into the wet mixture and gently fold. Do not over mix.

don’t worry if the red is not as vibrant anymore. It will lighten up again in the oven!

Spread the red velvet brownie batter on the prepared 8×8 baking pan , saving about 1/4 cup of batter for topping.

The texture should be smooth.

Using a knife of a wooden skewer, gently drag it across the top of the red velvet brownies to create beautiful swirls.

Bake the brownies for 25-27 minutes or until .a toothpick inserted in the middle comes out clean. Allow the brownies to cool down completely before you try to cut into them.I cut mine into heart shapes using a heart cookie cutter but you could also cut them into 16 squares.

Make sure to follow these tips when making your awesome red velvet brownie bites!

If you enjoyed this red velvet brownies cheesecake bites, please let me know in the comments below 🙂 !

If you enjoyed this cheesecake swirled red velvet brownies recipe make sure to pin it for later! 😉