This small batch of cream cheese frosting recipe is a life changer! It will allow you to make just enough to frost your cupcakes or small cakes without any leftovers… Because let’s be real who wants that!

This is by no means a healthy recipe but, it does come in handy when in need of a small batch cream cheese frosting recipe!

For us, March and April are so full of birthday and events that require some baking!! Which I am by no means complaining about!

My passion for baking has started at a very young age. I remember wanting to mix random stuff together to create recipes when I was younger and guess what… sometimes they worked and sometimes they were terrible !!

But still, it is because of this curiosity that I was able to become as good as I am now!

Some of my early “fancy” baking memories as I would call them were memories of making cupcakes and elaborately decorating them!

Well… This small batch cream cheese frosting recipe is what made that possible!

Chocolate cupcake with a dollop of cream cheese frosting and a light dusting of Hershey’s cocoa!

That was the easiest thing to make but gave me so much room for creativity!

I went out and purchased some piping bags as well as son Wilton piping tips and started playing around!

I can still feel how proud and excited I was when I started decorating my first cupcakes and then cakes. Now looking back they were so simple 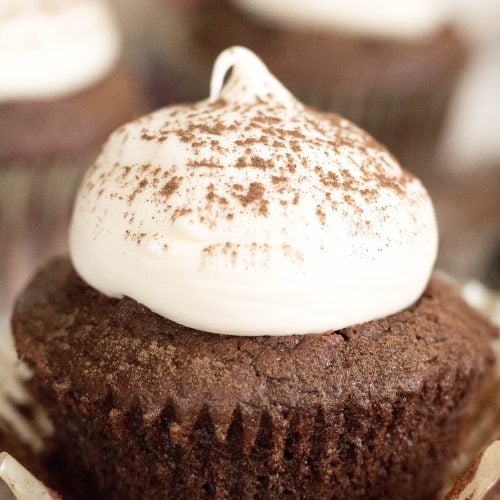 Chahinez
This is a very easy and simple recipe for cream cheese frosting! This classic frosting uses cream cheese, butter, heavy cream, and powdered sugar. It goes amazingly well with cupcakes, cakes, and cookies. And since it is a small batch you will not find yourself wasting any leftovers!
5 from 8 votes
Print Recipe Pin Recipe
Total Time 20 mins
Course Dessert
Cuisine American
Servings 1 cups
Calories

I like to use cold cream cheese and butter for this recipe because I feel like it gives me a better result. You will need a strong mixed to get everything well incorporated though!

If you liked this cream cheese frosting recipe small batch, I would recommend some more “how to” recipes down bellow:

This article may contain some affiliate links, meaning, at no additional cost to you, I will earn a commission if you click through and make a purchase