Tis the season to enjoy as much pumpkin spice everything as possible. This Iced Vegan Pumpkin Spice Hot Chocolate is the perfect drink recipe for when it’s not completely cold outside but you still have hardcore PSL cravings!

It’s time… bring on all the fall flavors because I am ready as can be!

September is here but it’s still super hot here in Las Vegas… So what to do when you’re craving a nice little cup of something pumpkin spiced?! Well you go for this Iced Vegan Pumpkin Spice Hot Chocolate.

An oxymoron for the title?

Trust me I know how ironic the title is… Back when I worked at the Bouchon bakery here at the Venetian, people would always come and order an iced hot chocolate. All of us were so confused and when we told them oh ok so you want a chocolate milk, they often got upset.

We obviously got a good laugh at the situation because “iced” hot chocolate is no different from chocolate milk, unless someone can prove me different! But for the sake of this recipe as well as SEO, here we are, using oxymorons and what not… 😂

After doing ample amount of research, I have been able to conclude that an iced hot chocolate is made using hot cocoa packets and then served over ice ( or so they say.) To me, the best hot chocolates are those made from scratch so I will stand by the fact that hot chocolate and chocolate milk are about the same thing!

You heard that right! This is a three ingredient recipe, plus ice.

See, I told you this is a super simple recipe that does not require much. The coolest part is that you can whip it up in minutes and enjoy it anytime, plus who doesn’t like the extra added protein! 🙋 I’m all for it especially since I don’y consume that much meat and am watching how much soy I have…

Since we are using already prepared chocolate milk you could argue that this is the lazy way to make iced hot chocolate but I prefer to say this is the smart way to go about things ! 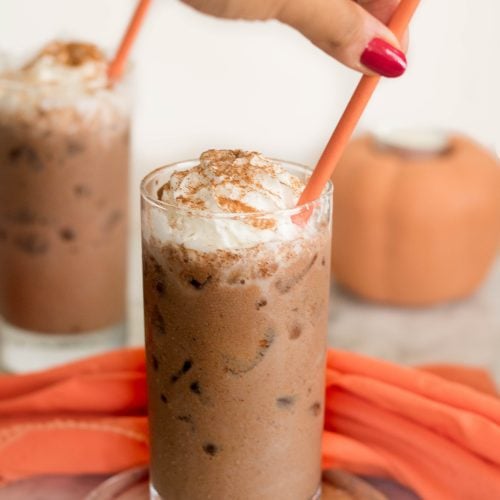 This has honestly become my favorite September drink… and I’m sure it will become yours as well if you give it a try. Plus what’s cooler than discovering an awesome Plant protein non-dairy milk and getting a recipe with that too!

When I purchase non-dairy chocolate milks they often are extremely sweet. Often times to hide a flavor that will make it taste different from dairy chocolate milk. In my opinion, it is better to embrace the difference than fight it which is what Bolthouse did with this one!

I have never had pea milk before but I sure sis try pea protein and it was pretty bad to be honest. Obviously I Was a little skeptical when I saw that this but to my surprise it tasted amazing! Not too sweet and very creamy but yet smooth.

I particularly enjoyed the fact that it is pretty high in protein seeing that almond milks often lack that. If you see this in store, give it a try asap it’s delicious.

Fall is coming so stock up on the best pure pumpkin puree!

If you enjoyed this iced pumpkin spice hot chocolate make sure to pin the recipe for later!