This Starbucks apple crisp macchiato is the ultimate fall drink. It is the newest addition to the Starbucks fall menu and for a good reason! It is made with apple brown sugar syrup to bring you all the fall flavors in a nice cup of coffee!

Starbucks has done it again! It released this apple crisp macchiato and it tastes like an absolute dream.

I immediately went and grabbed myself a grande iced apple crisp macchiato, Kyle got a cold brew but he ended up wanting my drink after tasting it because it’s actually really really good.

This is the best Starbucks apple crisp macchiato recipe ever!

After trying it, I took a few notes on my phone to rememeber what the drink tasted like exactly and it had light flavors of apple mixed with a subtle hint of cinnamon spices and espresso.

All these flavors worked so well very harmoniously and weren’t too overpowering. I usually thing Starbucks drinks are super sweet but this was one was very well balanced.

Here are the ingredients you will need to make this iced apple crisp macchiato. Make sure to scroll down to the recipe card for the full detailed ingredient measurements.

What’s the anatomy of a Starbucks Apple Crisp Macchiato ?

A starbucks apple crisp macchiato is made by first adding in some brown sugar apple syrup then either ice and cold milk or steamed milk, topped with espresso coffee, then drizzled with the spiced apple sauce.

If you’ve seen the pictures, it looks like there is some sort of this syrup at the bottom, well that’s the apple drizzle that sinks to the bottom. Hence why you should definitely mix your drink before drinking it especially if using a straw.

This is how you can make this fall apple coffee drink. Make sure to scroll down to the recipe card for the full detailed instructions!

Can I purchase the brown sugar apple syrup instead?

Yes! You can purchase the Monin brown sugar syrup and the apple syrup instead if you don’t want to go through the hassle of making your own. You can then mix a little bit of both to create the Starbucks fall flavored drink.

This fall Starbucks drink tastes literally like an apple pie or apple crisp! I mean it has all the fall spices in the syrup and the apple drizzle sauce so it delivers a nice kick of spices with the smooth apple flavors.

II personally prefer it cold because it’s a lot more refreshing and better tasting too. I don’t know if it’s because I’ve had it today and it was 100 degrees outside or if it’s just better cold. Let me know wha tyou think if you’ve tried it.

Yes! These apple macchiatos have caffeine because they use espresso shots.

Here is the anatomy of a macchiato, usually it starts with a vanilla syrup but in this case, we are using the brown sugar apple crisp syrup. It is then topped with steamed milk if hot or just regular milk over ice if iced. last but not least, it is topped with freshly brewed espresso which has about 65-75mg of caffeine.

So all this to say that yes your drink will have caffeine, which makes it awesome for morning time or afternoon pick-me-ups.

What to do with the apple I boiled to make the syrup?

I am all about no waste when it comes to making recipes. That’s why I don’t toss the apples used to make the syrup, instead, I use them in oatmeal and yogurts and you should too!

This recipe makes enough syrup for a few drinks so you can store your syrups in an airtight jar container in the fridge for up to 1-2 weeks. I doubt they will last that long though!

Can you make this Starbucks apple crisp macchiato dairy free?

Yes! You can use whichever milk you’d like. I used 2% milk to make this recipe to keep it as similar to the original one as possible but you can use oat milk, almond milk, soy milk, or any milk you have on hand.

My apple crisp drizzle syrup reduced too much and now it’s solid after I chilled it, what should I do?

If the syrup has reduced too much, you can add a few tablespoons of apple juice and bring to a simmer again to combine it. Remove from the heat and cool down again before drizzling your

If you made this Starbucks apple crisp macchiato and enjoyed them, don’t forget to leave a 5-star review by clicking on the 5 stars under the title and description. It would help me a ton 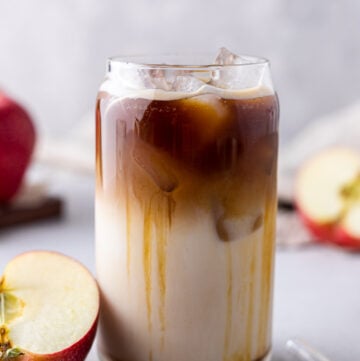 My apple crisp drizzle syrup reduced too much and now it’s sold after I chilled it, what should I do? If the syrup reduced too much, you can add a few tablespoons of apple juice and bring to a simmer again to combine it then remove from heat and cool down again.    To make this drink hot, pour steamed milk in a glass, add in the apple syrup, espresso shot, and the apple crisp drizzle and enjoy!

If you enjoyed this Apple crisp macchiato recipe make sure to pin it for later!