This easy recipe for pie crust article will teach you exactly how to make homemade flaky buttery pie crust every time! I will also be showing you how to make a fluted pie rim as well as how to blind bake or pre-bake your pie crust!

The thanksgiving and black Friday craziness is finally over!! Yay! So that means I get to come back and post more amazing articles and recipes for you guys.

This how-to article might be a little off timing-wise since thanksgiving has just passed. But I would like to think that you guys enjoy pie for Christmas as well!

I made this homemade pie crust recipe for thanksgiving a couple of days ago and absolutely everyone loved it! Three people asked for the recipe and now I decided to share it with you guys too!

It worked amazingly when I added my cranberry curd and baked it for an additional 30 minutes. Topped it with fresh swiss meringue and that did the trick!

It was the STAR of the thanksgiving meal… and trust me there was quite a lot of food.

How did this homemade pie crust come about?

Well… I wanted to experiment in the kitchen a bit so I decided to make something I’ve never made before. I did not create the al butter flaky homemade pie crust though even though I wish I did haha!

I’ve always made homemade tart crusts and multiple other types of crusts but I have never made a homemade American butter pie crust. To me, it was always so heavy until I tried to make it myself!

Trust me store bought pie crust does not compare when it comes to this recipe. The best part is that It is literally the easiest thing to make… Like ever!

Ingredients for this easy recipe for homemade pie crust

Like I said before, this is an extremely easy homemade buttery flaky pie crust. So that means that you will most likely have the ingredients at home already! Here is what you will need:

Recipes you will love!

Equipment to make this easy recipe for pie crust

Ok, the ingredients sound too good and easy, what do I really need to make this easy homemade pie crust…

Honestly, this recipe is a breeze. You will have yourself a nice slice of pie in no time because I got you!

See! I told you there are so many ways to make this. No matter what you have or don’t have you will be able to make this recipe.

How to make homemade pie crust?

To make this simple buttery homemade pie crust, start by combining flour, salt, and sugar together. You will then want to add the cubed cold butter into the flour and mix using your hands to get everything combines.

After adding in the butter and incorporating that into the mix, start adding the ice-cold water one tablespoon at a time and gently mixing the dough. This recipe will need between 7-8 tablespoons of water. You do not need to use the full amount, use only enough ice water for the dough to come together.

Once the dough comes together, gently pack it together into a ball. Wrap the dough with plastic wrap and place in the fridge to chill for an hour.

After cooling your pie dough in the fridge for about an hour, unwrap it and transfer it to a lightly floured surface. Roll the crust into a rectangle (don’t worry about it being perfect), fold that crust in half, then fold it in quarters again. After folding the dough a few times, not time to roll it into a ⅛-inch-thick circle large enough to cover the bottom and sides of a 9-inch pie plate.

Fold the overhand under so that there is enough thickness to flute the edges and start fluting :)! Freeze the dough for another 30 minutes while your oven is preheating to 425F. Then add the parchment paper and the dry beans and bake for 15 minutes. Remove the pie weights and bake for another 10-15 minutes or until the crust is golden brown. Brush with egg whites to seal.

How to flute pie crust?

Even though this sounds pretty intimidating, it isn’t hard to do at all. To flute your pie crust rim, hold your thumb and index finger an inch apart on the outside edge of the crust. Then press between the two with your index finger of the other hand. If you have long nails and you can’t do it this way. You can always use your knuckle instead of your index finger to make the beautiful fluted shape.

How to make pie crust flaky?

There are a few things that determine whether your pie crust will be flaky or not. The biggest thing is cold butter! Making sure that your cubed butter is cold once mixed into the flour is extremely important because it will create pockets in the pie crust when it’s baking which will make your pie crust extra flaky.

How to prevent a soggy bottom or a soggy pie crust?

Here are a few points that will keep your pie from being soggy at the bottom:

Can I use a food processor to make pie dough?

You can but it is not recommended. Using a food processor will not allow you to control the size of the butter pieces left in the pie crust making the crust a bit less flaky! 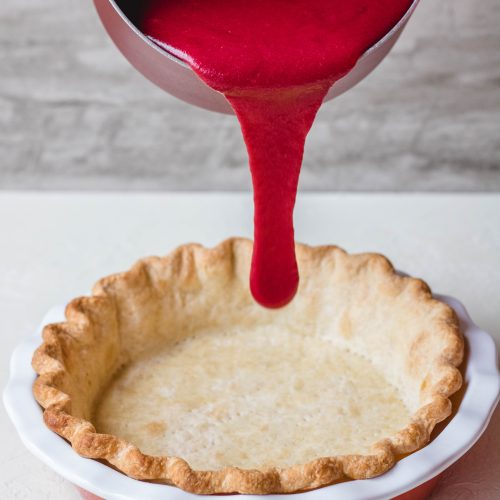 Making ahead and freezing.  You can make this pie crust ahead of time. Follow this recipe through step 4 then tightly wrap the dough and freeze for up to 3 months. Once you’re ready to use, thaw in the fridge overnight.

What can I use instead of pie weights?

I often see pie weights being sold at boutique or specialty stores for quite a large amount of money. But with this trick that I learned while doing my pastry internship, you’re about to save a whole lot of it! Here are some alternatives to using store-bought pie weights:

What happens if you do not use pie weights?

Well, when you pre-bake your empty pie crust or blind bake it should I say… The dough usually will puff up and rise in the center. By using the pie weights of the dry beans, you will not run into that issue.

Can you freeze unbaked pie crust?

Pie crusts freeze very well. It will also make your life easier if you ever need to make a pie to take with you somewhere when you don’t have time to make it from scratch!

What you can do to freeze this absolutely delicious and easy homemade pie crust is to either freeze it in discs. Since this recipe makes two discs, you could use one and freeze the other one.

The second option would be to press the pie dough into a pie pan, create the fluted edges, cover it tightly with plastic wrap and

If you enjoyed this Easy Recipe for Pie Crust article make sure to pin it for later!