This recipe requires a few pantry staples that you’ll throw together to create some magic in the kitchen.

This is the best apple cider donut cake recipe ever!

Every fall, I find myself reverting back to making this easy apple cake, and trust me people ask for the recipe every time so why not share it on here to make everyone’s life easier.

This cake is perfect to serve with a hot cup of coffee or tea too!

What is apple cider bundt cake?

Well, Apple cider bundt cake is pretty much an homage to our favorite apple cider donuts that we always get when we go apple picking at the orchard. It is a spiced apple cake made with apple cider and apple sauce to really bring out those flavors while keeping it extra moist. It is then finished with a generous spreading of butter and a drizzle of cinnamon sugar.

Here are the ingredients you will need to make this apple cider donut bundt cake. Make sure to scroll down to the recipe card for the full detailed ingredient measurements.

This is how you can make your own apple cider bundt cake recipe. Make sure to scroll down to the recipe card for the full detailed instructions!

Can I make this apple cider doughnut bundt cake in advance?

This cake is best made and enjoyed the same day especially since it has a good amount of cinnamon sugar coating.

The longer it sits the less crunchy that cinnamon sugar topping becomes so if you’re okay with that then feel free to make it in advance, but I wouldn’t recommend it.

You can store this apple cider cake in an air-tight at room temperature container for up to 2 days. I like to warm it up in the microwave for a few seconds to get it warm and fresh again.

Keep in mind that it is best on the same day!

If you made this apple cider donut cake and enjoyed it, don’t forget to leave a 5-star review by clicking on the 5 stars under the title and description. It would help me a ton 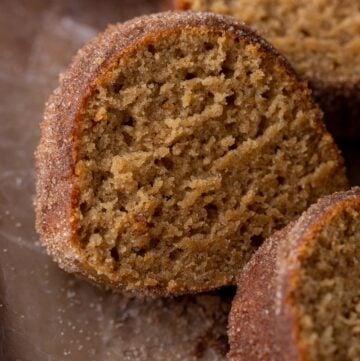 If you enjoyed this apple cider donut cake recipe make sure to pin it for later!