I know I know, we’re probably going a bit air fryer crazy but making cinnamon rolls that way is something that will save you a ton of time and will keep the oven temperature down, especially during the upcoming hot summer days!

The thing with this air fryer recipe is that your rolls will only take about 5-6 minutes to fully cook making them a lot faster than regular oven cinnamon rolls. Without sacrificing the taste of the texture that we all love.

If you’ve ever wondered “can you cook Pillsbury cinnamon rolls in the air fryer” I’m here to bless your day and let you know that the sky is the limit! They can be made in the air fryer and they are so easy too!

I said Pillsbury but I want to make sure that you know that you can use any cinnamon roll brand you prefer. I just know that that brand is affordable and easily accessible to everyone in the United States.

Ingredients for this quick breakfast/brunch recipe

Here are the ingredients you will need to make this easy canned cinnamon roll recipe in the air fryer. Make sure to scroll down to the recipe card for the full detailed ingredient measurements.

They contain whey protein so they technically aren’t vegan friendly. But if you are looking foe Vegan friendly canned cinnamon rolls you can go with:

This is how you can make these air fryer Pillsbury cinnamon rolls. Make sure to scroll down to the recipe card for the full detailed instructions!

Which air fryer is best for these?

I love my Ninja air fryer, but I know that the Ninja foodi also works great. Most air fryers will work for this recipe because of how simple it is. As long as the basket is large enough to fit your cinnamon rolls, go ahead and air-fry up some rolls for you and your family!

How long do you cook Pillburry cinnamon rolls?

These cinnamon rolls can be baked in a 350F air fryer for 5-6 minutes.

The number one reason why I would always recommend making cinnamon rolls in the air fryer is purely because of time-saving reasons.

While baking canned cinnamon rolls in the oven will take about 13-17 minutes, making them in the air fryer will save you about 8-12 minutes every time.

During the air frying time, you can cook up some bacon, eggs, and make coffee before the cinnamon rolls will be ready to serve.

How to store leftover cinnamon rolls?

They can be stored in an air-tight container at room temperature or in the fridge for up to 3 days. Just know that the fresher they are the better tasting they are.

How to reheat them in the air fryer?

If you have leftovers, store them properly and reheat them in the air fryer at 395F for 3-5 minutes or until they are warm.

Can I make the Pillsbury grands jumbo cinamon rolls in the air fryer?

Absolutely! When it comes to cinnamon rolls, I think the bigger the better but that’s just me haha! To bake your larger cinnamon rolls, you will do the same thing as you would with the smaller ones but bake them for 4-5 more minutes to make sure that they are baked fully in the center.

Drizzle with the icing and enjoy!

Should you use parchmenet paper in an air fryer?

That will entirely depend on you. If you don’t have air fryer parchment paper then I wouldn’t worry about it and just use a tiny bit of cooking spray instead.

If you do have air fryer parchment paper on the other hand then by all means use it to make clean up even easier!

Can you put foil in an air fryer?

Yes, you can! I prefer not to use foil with my food in general so parchment it is for me but if you don’t have that and want to use foil feel free.

Canned cinnamon rolls are made specifically to give you that perfect Cinnabon finished product every time. So yes they will rise, and yes they will be glorious, especially with that glaze that you’ll add on top at the end.

Can I make from scratch cinnamon rolls in the air fryer?

Yes! Follow whatever recipe you’re using, let the rolls rise in the air fryer basket then bake them at 350F for 10-15 minutes depending on how large your cinnamon rolls are.

Be aware that when your cinnamon rolls are touching they will take a bit longer to bake.

Since I have you here, can I make biscuits in the air fryer?

I’m so glad you asked! You sure can, and they will turn out delicious! You’d have to check out these 5 minute Air fryer donuts made out of canned biscuits too!

If you made this recipe and enjoyed it, don’t forget to leave a 5-star review by clicking on the 5 stars under the title and description. It would help me a ton 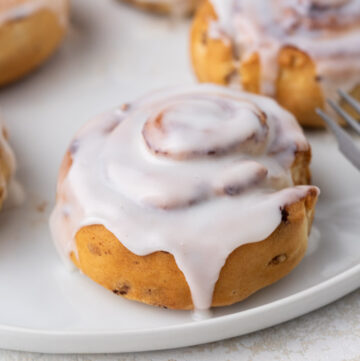 How to store leftover cinnamon rolls?

They can be stored in an air-tight container at room temperature or in the fridge for up to 3 days. Just know that the fresher they are the better tasting they are.

How to reheat cinnamon rolls in the air fryer?

If you don’t finish your cinnamon rolls store them properly and reheat them in the air fryer at 395F for 3-5 minutes or until they are warm.

If you enjoyed this cinnamon rolls in the air fryer recipe make sure to pin it for later!